One of the project partners of the Swiss Employers’ Association's April 2015 report on "Women on Boards - 400 proposals for Swiss companies" or in German "Frauen im Verwaltungsrat – 400 Vorschläge für Schweizer Gesellschaften".

Before founding AdValorem Partners, a leadership advisory boutique, François E. Clerc was a Senior Partner at the world largest privately owned executive search firm. Based in Geneva, he worked at local, national and European level for a wide range of clients ranging from Swiss privately owned companies to Fortune 500 multinationals. Prior to his consulting years, he was managing director of a Swiss company active in the Asia Pacific region, based in Hong Kong. François started his career at HP Europe and spent 15 years in the technology field. Since 2000, he is an active promoter of Advisory Boards and Boards' governance. He is the producer of a radio show called "Executive Life" that hosted senior leaders to talk about the ingredients of their success and the lessons learned from their failure. Lastly, he is the founder of the Presidents Club, an informal advisory board active in the Lemanic region gathering CEOs and Presidents from the international local community.

Recently, François also co-founded Triple A Associés a company that offers workshops in corporate governance in Switzerland. He is also the CEO of a medical group, of which he used to be an advisor to the board.

Sabine Beppler-Spahl studied economics at the University of Hamburg. She went to school in Hong-Kong and Germany. She currently works in adult education in Berlin and lectures at the University of Applied Sciences in Potsdam. She speaks English, French (Diplome approfondi in 2001) and Spanish. She is also a regular contributor to the German magazine NovoArgumente and has published articles in Die Welt, Berliner Zeitung, Frankfurter Allgemeine Sonntagszeitung, Zeitschrift Merkur and other publications. She is married and has two children.

Carlos Orozco is a Mechanical Engineer from Universidad de los Andes in Bogota, Colombia and a successful international executive, expert on the subjects of Innovation and Transformation Strategies for Value Growth.

He worked for over 28 years with The Dow Chemical Company (Dow) in Latin America, USA and Europe, occupying global leadership positions. Carlos is known for his ability to create and manage organizations driven by a culture of innovation, and was decorated in 2008 with the "Genesis" award, the highest global recognition of Dow leaders.

Dr. Barbara Lang is CEO of joba AG –Corporate Health Made in Switzerland. The former IBM Manager and management consultant is now working with companies to improve their „Corporate Health". She has the metrics and tools to help corporations develop a healthy, inclusive corporate culture that allows people to be their best. While many corporations still focus on programs to “fix the men and women”, she found the true leverage elsewhere. Values have changed – but have corporate structures?

Eleanor “Tabi” Haller-Jorden, President and CEO of the Paradigm Forum GmbH, is a recognized voice in the fields of global leadership, workplace design, cross-cultural management and social justice within the organizational context. With over two decades of high-level experience in the public, private and academic sectors – most recently at Catalyst as Senior Vice President Global Learning and General Manager of Catalyst Europe – she is a frequent media contributor, lecturer and speaker.

Are gender quotas a waste of time? 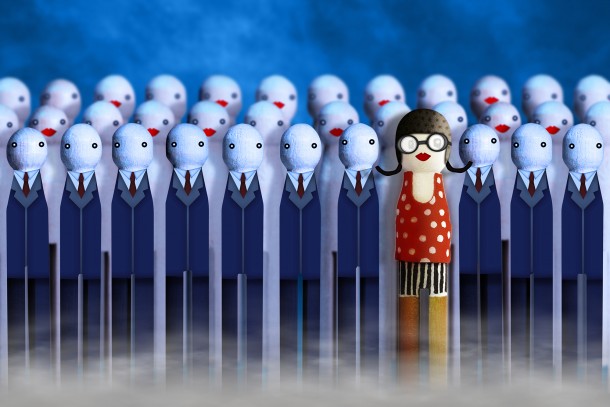 Do women require special pleading and new laws to “break the glass ceiling” on gender?

Since 2012 EU Commission has campaigned to make it a legal requirement for the largest 5,000 businesses in  Europe to employ 40 per cent women in leadership positions by 2020.

Last year the Swiss Cabinet of seven ministers called for a minimum of 30% of the boards of major companies and institutions with close connections to the Swiss government to be composed of women by 2020. But decided not to make it legally binding.

Some claim that companies with mixed gender boards are more innovative and more successful commercially because they bring diversity of views and behaviour into the corporate world.

Meanwhile most workplaces are desperate to recruit more women to senior positions. However even some feminists acknowledge it is women themselves who sometimes choose less demanding careers in order to take responsibility for their children, inevitably earning less money and prestige. 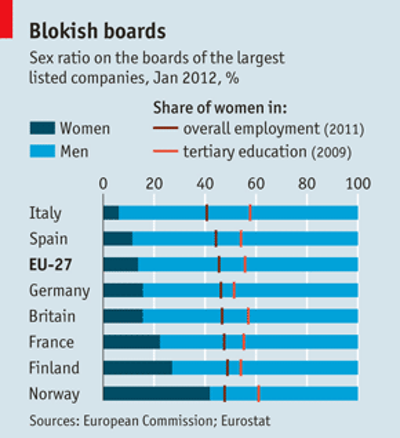 Unsurprisingly, firms dislike being bossed by government. A recent survey by the Swiss Employers’ Association (SEA) found that companies prefer to create their own codes of best practice when it comes to setting their corporate governance commitments. Indeed, according to the SEA’s president Valentin Vogt, legal quotas risk undermining entrepreneurial freedom. Nevertheless his organization acknowledges that the current situation of low female representation at the top of business is not acceptable.

Where do you stand?